From the Cosmos for OS/2 release letter:


"The Cosmos for OS/2" was developed by me during the period 1992 and 1995 and further enhanced in subsequent years. The project very much started as a learning excersize for the "C" programming language, the OS/2 Operating System and OS/2 Presentation Manager programming (now available as eComStation). To have some tangiable results of this learning I started developing a planetarium application. Cosmos has been available on the market from 1994 and exclusively distributed by Mensys from 1996 until 2004.
Cosmos was the first so called "edu-tainment" (from educational and entertainment) application for 32-bit OS/2 Version 2 and did receive the "IBM OS/2 2.0 Development Award".
The latest OS/2 Warp video drivers are however not downward compatible with the official API's that I use these years ago, which means that part of the program needs te be re-written to get it to work again.
An undertaking that I do not plan for the near future.

Cosmos had become a program which was designed to aid the astronomical observer, from the novice to the expert. It offers one of the quickest and easiest ways to learn about astronomy end get acquainted with the heavens.

The graphics capability of the personal computer are used to display or simulate star charts which can include:

Cosmos can be very useful as an aid in planning observing sessions which is an important, but often neglected, part of amateur astronomy. For example, the program can be used to show what objects will be visible, and whether they will be well placed for observing. Another use might be to determine if moonlight will interfere with variable star, or deep sky observations. In the past, such tasks as these often required that data from an almanac be plotted by hand on a chart from one of the popular star atlases. Now a simpler method is available by using Cosmos to generate the desired display. Cosmos is also helpful in locating and identifying faint objects, in learning star fields, and as an aid in visualizing what may be seen through the telescope. In addition, to such practical uses, Cosmos provides an opportunity for anyone to learn about astronomy and celestial mechanics by graphically illustrating many of the changes which occur in the sky and by being an on-line, comprehensive and easily accessible Encyclopedia of Astronomy. 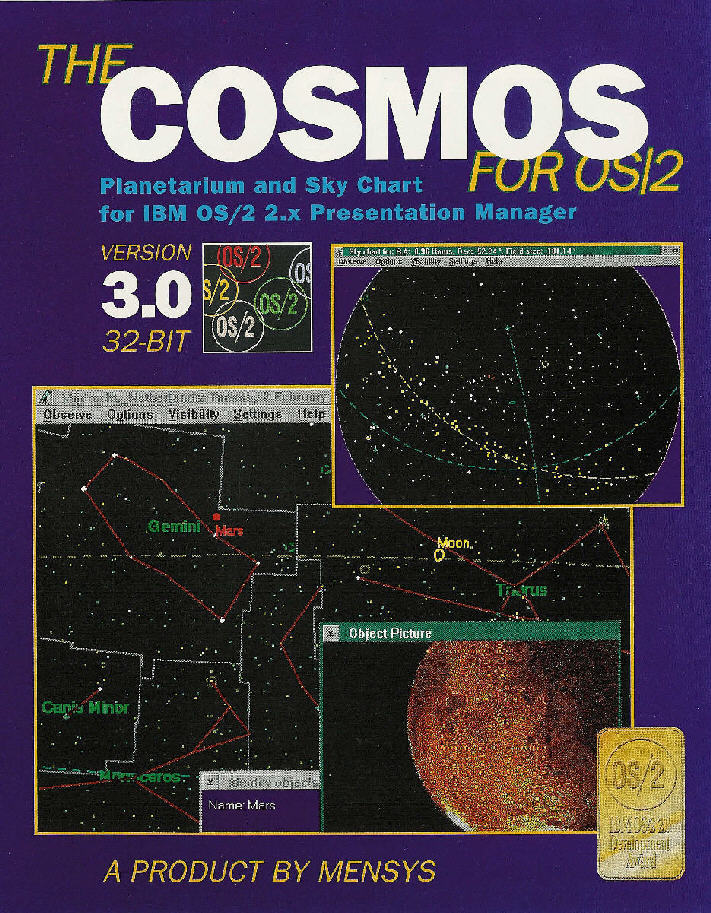 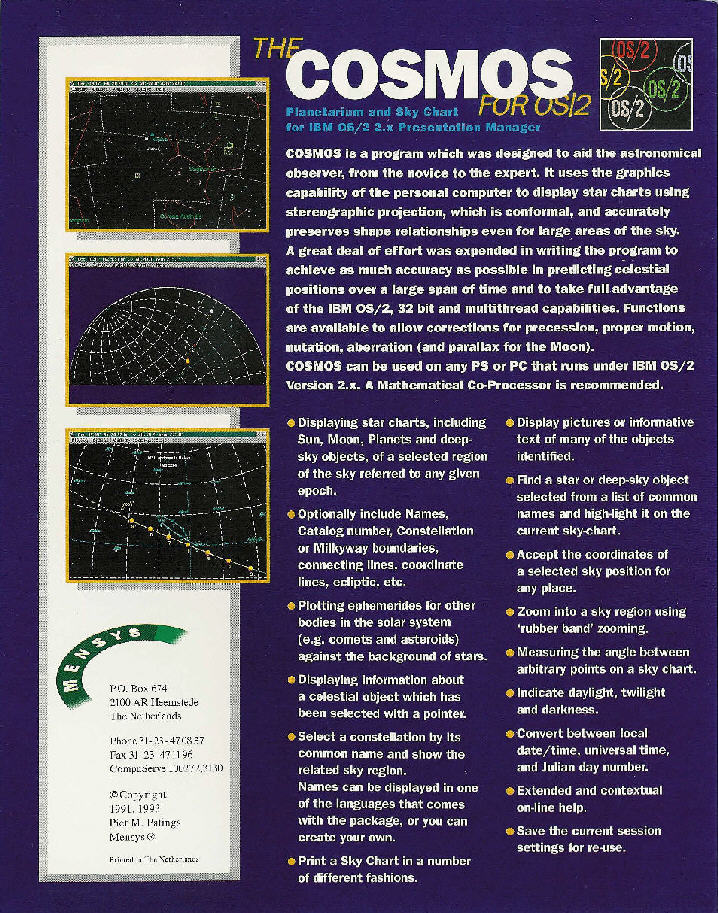 The Cosmos has many features, including:
Cosmos uses several techniques to handle larger databases while still maintaining (well barely) acceptable speed also for those not blessed with a mathematical coprocessor.
Because Cosmos takes full advantage of the OS/2 multitasking capabilities it will also plot in back-ground, hence even without a math-co it will still be useful; however, use of simulation or large databases should be avoided. One of the techniques used is breaking the data into several files containing different magnitude ranges, each sorted by right ascension.
Also, when plotting smaller regions of the sky, efficient search routines are used to aviod scanning the entire database. Star charts are displayed using stereographic projection which is conformal, and accurately preserves shape relationships even for large areas of the sky.
A great deal of effort was expended in writing the program to achieve as much accuracy as possible in
predicting celestial positions over a large span of time. Functions are available to allow corrections for precession, proper motion, nutation, aberration (and parallax for the Moon).
A more detailed description of the algorithms used in Cosmos, and some estimates of the accuracy which can be expected will be added later here.

"The COSMOS for OS/2" Version 4.0 is a versatile program in the category "edutainment". It is not only the first but also the only one of its kind available for OS/2. Integrating many features not often found in a single program, this is more than just a desktop planetarium.

Whether you are just intrigued by the richness of the night sky, are an armchair astronomer, or an experienced observer wanting to plan and record your observations, this program will appeal to you. COSMOS is a program which was designed to aid the astronomical observer, from the novice to the expert. It offers one of the quickest and easiest ways to learn about astronomy and get acquainted with the heavens even without a real telescope and clear skies.

The program fully exploits the graphics capability of the personal computer and the OS/2 80-bit ANSI precision and multithreading capabilities to accurately display and print star charts, simulate celestial events such as conjunctions (groupings of planets), occultations (events that occur when the Moon passes in front of a star) or eclipses (Moon obscuring the Sun), or zoom into or out from a sky region, with or without animation, at Warp speed.
Star charts are displayed using stereographic projection which is conformal, and accurately preserves shape relationships even for large areas of the sky. A great deal of effort was expended in writing the program to achieve as much accuracy as possible in predicting celestial positions over a large span of time while preserving performance.

The program comes with the Yale Catalogue of Bright Stars which includes 9,091 stars brighter than magnitude 6.5, a deep-sky catalogue containing 8,414 entries with all 110 Messier objects, Index Catalogue (IC) objects and New General Catalogue (NGC) objects, and an additional deep-sky database containing 1,953 entries with a variety of deep-sky object types, including Dark Nebulae and the recently discovered Dwingeloo-1 galaxy.
Optionally a binary version of the Smithsonian Astrophysical Observatory catalogue (SAO) can be purchased
which contains accurate positions of 258,997 stars as faint as magnitude 11.9.

With a click of the mouse information about every object can be accessed instantly. Not only can you add your own notes and photo's for each and every one of these, but also for many objects you will find informative text and 256-color images. Those interested in history, mythology or astrology will like the Constellation dialog.
Select one of the 88 constellations from a list and read about its history, add your own notes, plot the related sky region for today, tomorrow or for the actual day and year of your birth.
See the planets move along the ecliptic relative to the constellation and see the zodiacal constellations move through the sky throughout the year.

Chose the controls you want, standard Common User Access, a Toolbar or hide them all to take advantage of the full screen size. Functions are available to allow corrections for precession (the slow wobble of Earth's axis over 26,000 years), proper motion, nutation, aberration (and parallax for the Moon). Find the position of a planet now, 2,000 years ago or 2,000 years in the future, look at the distribution of stars, galaxies, clusters or nebulae, simulate the motions of planets through the sky, show the positions of asteroids (minor-planets) or see the rapidly changing orbit of a comet. Of course you can also add your own objects and let COSMOS take care of the calculations and projection.

A multitude of options is available to customize the charts to your specific needs: planets, moon phases, stars, deep-sky objects (galaxies, all types of nebulae and clusters, star-systems, quasars), labels, lines, numbers, color (including B-V index), orientation, size, shape, scale, daylight/twilight, and more. The program even shows the size, shape and orientation of a galaxy and other deep-sky objects if the information is available in the database.

The fully integrated on-line help uses the OS/2 Help Manager and includes a "Quick start" option. It provides a convenient way to get acquainted with the basic concepts of visual astronomy, OS/2-Information Presentation Facility and the COSMOS program by means of hypertext, hypergraphics and a comprehensive and easily accessible Encyclopedia of Astronomy in which all astronomy related terminology, used in the program or on-line help, is explained. It even lets you add your own notes to the help sections. The index section contains over 1,300 entries.

COSMOS runs on any machine capable of running OS/2 2.0 or higher. Although it can run without one, a mathematical co-processor is highly recommended. Free hard disk space required is 5 Mb with an additional 4.2 Mb if the SAO database is to be installed (not included).

Order Information (note that this is no longer valid !):


Below are some impressions taken from the press in the glorious days: 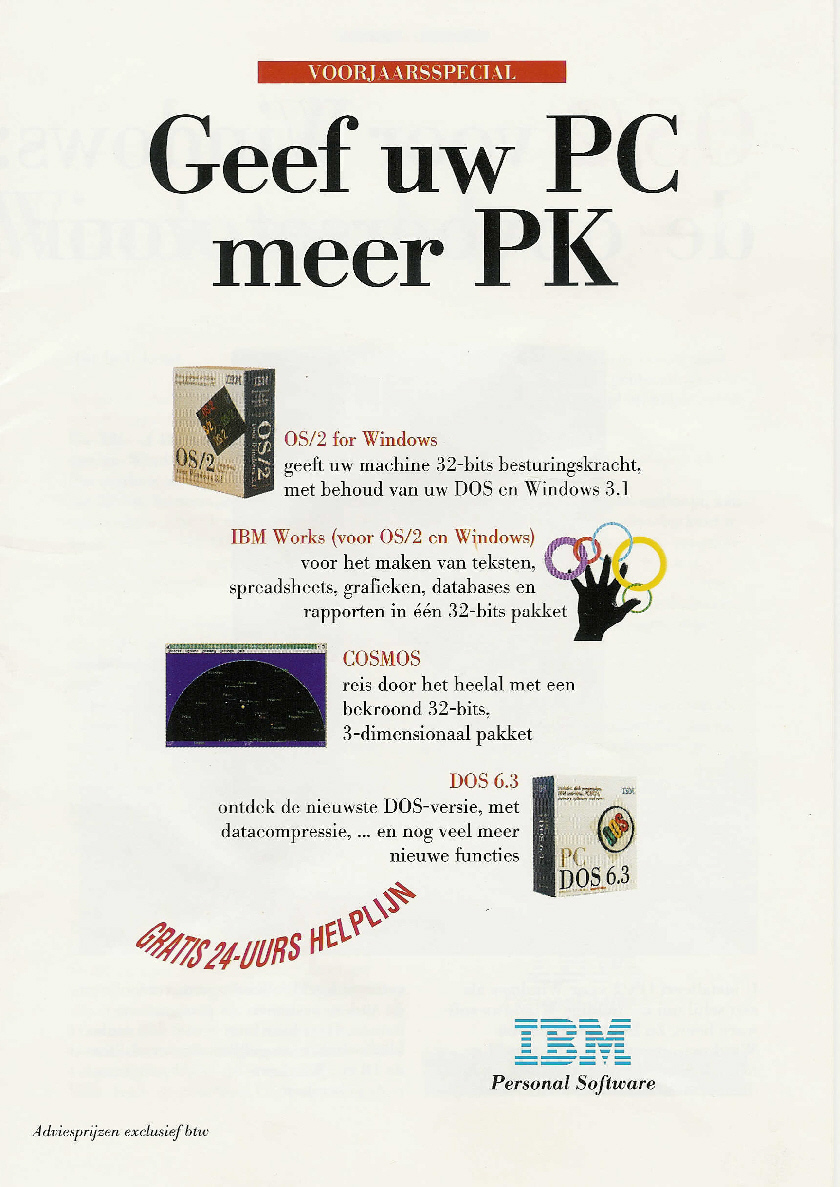 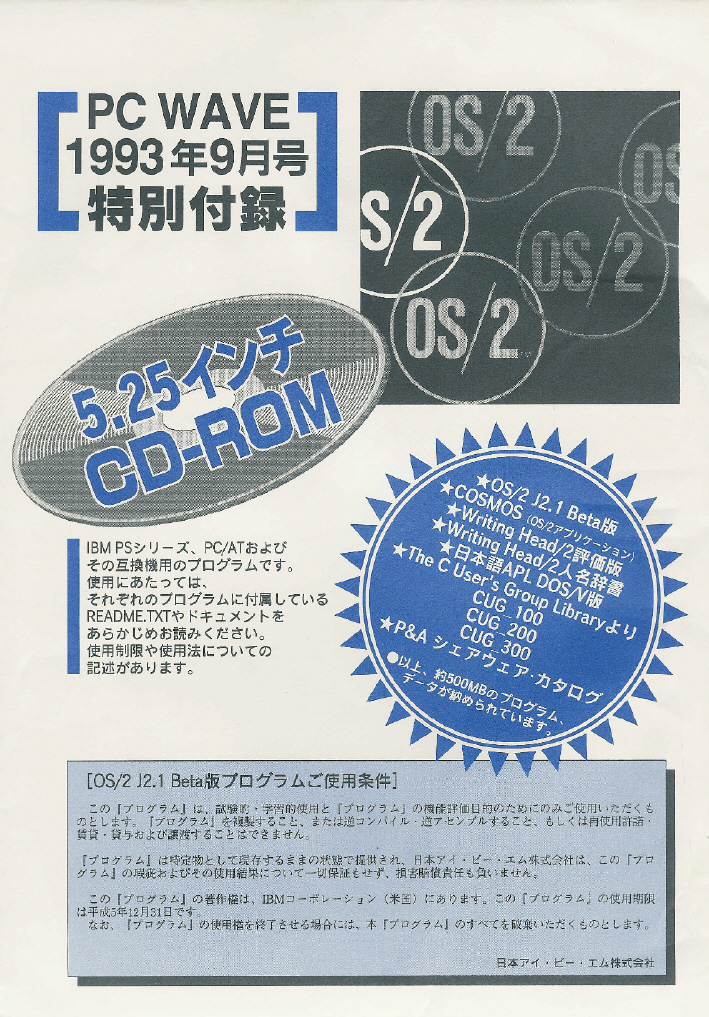 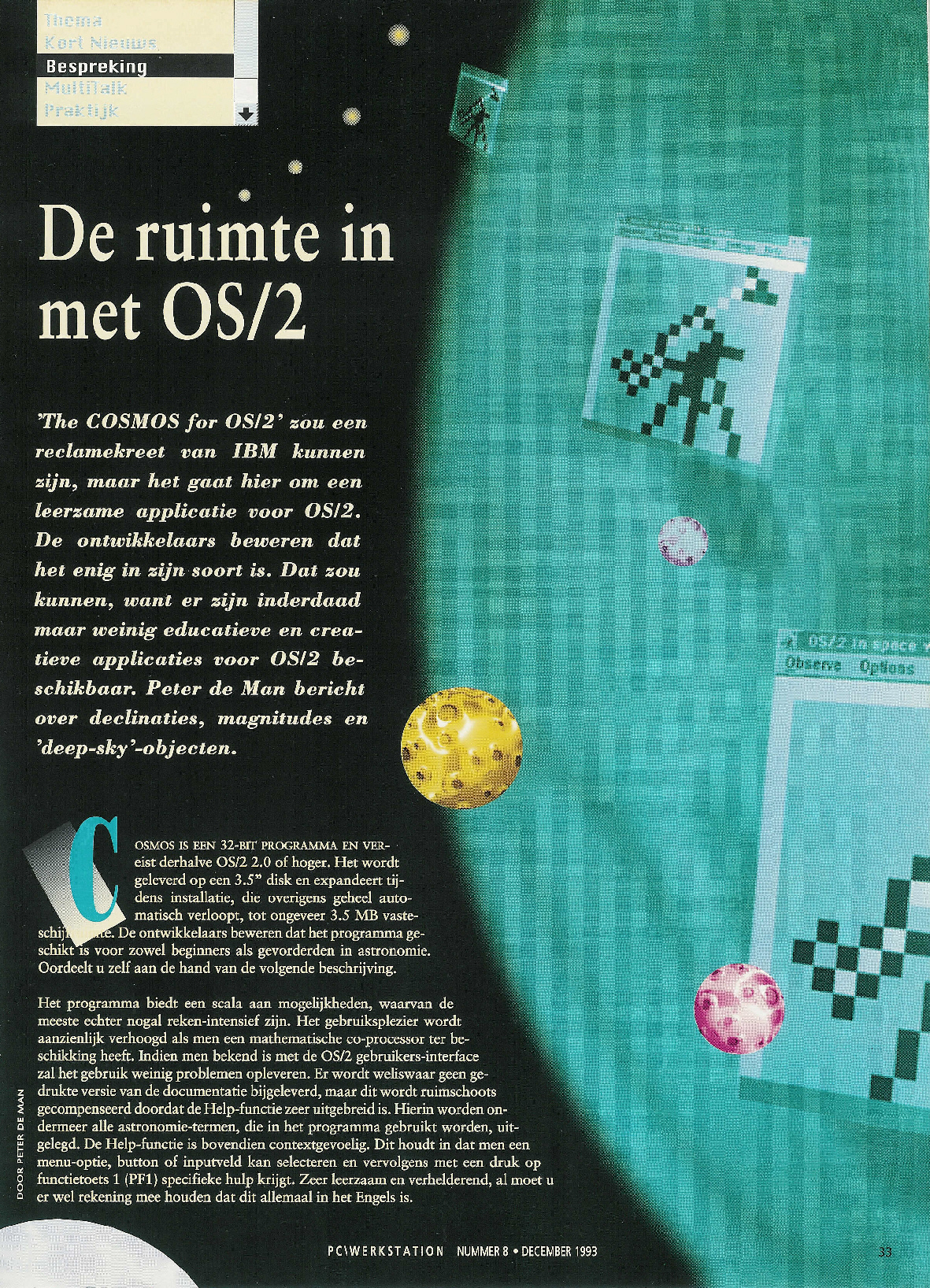